An odd topic for a vegan nutritional therapist, I realise. But stick with me…

Fish – oily fish like salmon, mackerel and trout – is widely considered a ‘health’ food for humans. When I was training to become a nutritional therapist, if the answer wasn’t ‘broccoli’, then it would usually be ‘oily fish’ or ‘fish oil’.

And there’s little doubt that fish oils, and the oily fish from which they come, contain fats that seem to be good for us. Those fats are called omega 3 fatty acids and they may be able to help damp down inflammation, promote better mental health, boost cardiovascular function and reduce pain.

The omega 3 fatty acids you get from fish are called EPA and DHA (ecosapentanoic acid and docosahexaonic acid to give them their full names). EPA and DHA are thought to be particularly useful in terms of their anti-inflammatory actions. Although in theory humans can make EPA and DHA from things like flax and chia seeds and walnuts, we’re not all great at doing the conversion so it’s recommended to consume direct sources of EPA and DHA as well.

So far, so fishy.

I saw this video footage on Facebook recently and I felt compelled to say something about it, and about fish, and about the need to find more sustainable alternatives.

The video shows fishing on an industrial scale and it is utterly terrifying. 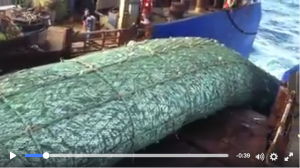 This is just one industrial trawler, scouring the sea of its fish, along with all the other hapless sea creatures that get caught up in those immense, seemingly endless nets. There are, doubtless, hundreds of thousands of other fishing operations doing the same thing all over the world.

So while oily fish may very well be helpful for humans, it certainly isn’t very good for fish, who have been shown to feel pain and fear as they die a slow and agonising death**.

Nor is it very good for all our futures.

At the rate at which we’re fishing the oceans, all the fish – oily or not – will be gone pretty soon. At that point, admittedly, getting more EPA and DHA into our diets may be the least of our worries. If the fish are gone and the oceans are plastic-filled dead zones you can bet homo sapiens will be in pretty big trouble too. And incidentally, some scientists predict this could be as soon as 2050*.

(And if you think fish farming is the answer, think again – ideally after reading this report from the World Wildlife Fund)

As a vegan nutritional therapist I tend to see things a little differently: I can’t seem to help it.

One of the six so-called ‘naturopathic principles‘ that I – and other nutritional therapists – adhere to says that we will ‘do no harm’. For most, this starts and ends with humans. It’s known as the ‘anthropocentric’ approach, which sets human needs above those of other sentient beings.

But for me, this principle applies to all living creatures and is the reason why I won’t encourage clients to consume oily fish or fish oil for whatever ails them. There are alternatives and it’s time we started getting familiar with them – for all our sakes.

Having said all that, vegans may be at risk of having slightly lower levels of omega 3. That’s partly because we eat plenty of sources of omega 6 and may need to balance things out with a bit more omega 3. But what a lot of people don’t realise is that the omega 3 fatty acids EPA and DHA are available in vegan form and have been for some time.

It’s the same source the fish use and it’s called algae.

However, you don’t have to eat slimy green stuff to get EPA and DHA from algae. It’s available in handy capsules. Just look for the Vegan Society certificate from brands like Opti3 (find out more about Opti3).

By all means keep eating those lovely chia, flax seeds and walnuts, which have many other benefits as well. Supplementing with chlorella and spirulina may be helpful too, if you tolerate their strong taste. But the upshot is that vegans and vegetarians may benefit from supplementing – and we can do this without relying on dead fish.

And if all this hasn’t persuaded you, just think: this could mean an end to fishy burps…